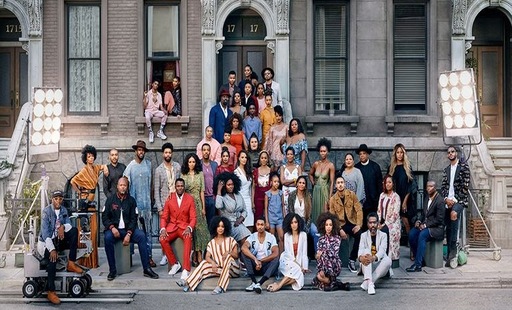 “…We’re not a genre, because there’s no one way to be black. […] This is not a moment. This is a movement. We are Strong Black Leads. Today is A Great Day in Hollywood.”

Two years ago, Netflix debuted a commercial spot during the 2018 BET Awards celebrating black actors, directives and the creatives who work for the streaming giant. Directed by Lacey Duke, the video was titled “A Great Day in Hollywood,” taking inspiration from the 1958 photo “A Great Day In Harlem,” a black-and-white photograph of 58 jazz musicians in the Harlem neighborhood of New York City.

Enriching conversations about race and identity are occupying a vital place in today’s culture. In honor of Black History Month, PRSA Orlando would like to celebrate the pioneers leading the charge in creating original content with a strong black identity that reflects its viewers by discussing the lessons we learned from Netflix’s Strong Black Lead campaign.

1. Give black creatives a seat at the table.

When Myles Worthington, manager of brand and editorial at Netflix, first arrived at Netflix in 2016, he noticed that the company’s black stories were not being significantly promoted. He then began connecting with African American media outlets and journalists through a monthly newsletter to build a network. He quickly began to see an increase in coverage of these Netflix features and the campaign grew from there.

If your team is looking to attract and engage today’s black consumers without including their voice in the room, your campaign won’t resonate culturally or experientially.

Based on research conducted by Cloverpop, inclusive teams make better business decisions up to 87 percent of the time. And according to Nielsen, black consumer brand loyalty is contingent upon a brand’s perception as authentic and culturally relevant. And with African Americans spending $1.2 trillion annually, brands have a lot to lose when they are not authentic or inclusive in their decision-making.

2. Use social media to engage with your audience.

Netflix’s Strong Black Lead Twitter account is overseen by Maya Watson Banks, Netflix’s director of brand and editorial, and a team of black creatives who share a passion for Netflix’s stories and content. The Twitter account has amassed over 119,000 followers because of the authentic language in which they engage with their followers, from sharing excitement over a character or a new series to celebrating the importance of representation during award shows.

Research from Nielsen shows us that black consumers are speaking directly to brands in unprecedented ways and achieving headline-making results. It reads that throughout 2017, popular brands witnessed the power of “Black Twitter” and the brand impact of socially conscious black consumers.

For those unfamiliar with Black Twitter, it is a virtual community and movement that consists of a diverse group of black Twitter users connecting on a variety of issues related to the experience of being black.

3. Focus on your audience’s social footprint.

Strong Black Lead has expanded its presence beyond its Twitter feed to Facebook, Instagram, YouTube, and even a branded podcast series. The first season of Strong Black Lead launched in February 2019, focused on Strong Black Legends, honoring and showcasing Hollywood icons such as Ruth Carter, Loretta Devine, and Jason Weaver. The second season, Strong Black Laughs, premiered in November 2019 bringing together the black champions of comedy, including Mike Epps, Marlon Wayans, and Nicole Byer.

Should your brand have a presence on every platform? What is the most popular social network for your audience?

Building a successful marketing campaign that authentically connects with black audiences takes time, but it is possible. Focus your marketing dollars on where your audience is and do not sacrifice quality for uninspired content that does not resonate. Marketers must be willing to do the research, understand and embrace their audience, and most importantly, ensure there is enough representation and inclusion at the decision-making level.